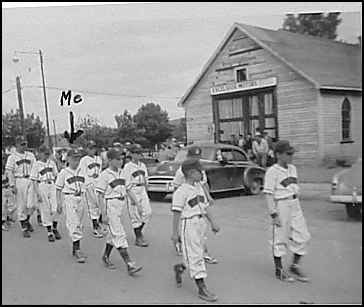 This is our team at the start of the parade.

This photo of Bruce on a plaster bear was taken in our front
yard a bit after this date.
Bob's house can be seen in the background.

July 14    This afternoon we played catch and raced on our bikes.

July 16    In the afternoon, I worked on my cart.   After supper we went swimming.  Later, we went to the chicken farm.

July 18   In the afternoon, Wayne went swimming, but I stayed home and helped Mom clean.

July 26   We played airplanes in the car.


[We believed that when we grew up there would be another major war. In our play, we flew bombing missions over Germany. Wayne and Bob were the pilot and co-pilot while I flew in the back seat as the bombardier.]

July 31   In the morning we were catching butter flies. After dinner we went to the show. After the show we played catch, & rode over a hill. [on our bikes]

Aug. 2   Today was all Little League. In the morning we beat the Indians. In the afternoon, we beat the Tigers. At about 6:00 East Coulee beat us 4,5. We are in 2nd place for today’s winnings.

Aug. 7   After supper we played cops and robbers.

Aug. 10   In the morning, we made paper bag masks and scared the little girls.

Aug. 11   Mom and Dad went into Calgary. Bruce got a fever and grandma looked after him. Miss. Richardson came over. A doctor came up too.

Aug. 12   In the morning, I flew my airplane that Mom brought home yesterday. We played vigilantes.


[We used our paper bag masks to scare the young children in our neighborhood. We stopped after one of the mothers told us we were harming her daughters.]

August 13    Today is Friday the 13th, the only thing that I did that was unlucky was to fall off the stock yards.


[I vaguely recall the fall. I caught the board as I fell and almost landed on my feet, so was not hurt.]

The top part of the stock yards had wide boards to walk on.
We often ran and played tag on those boards.

Aug. 18   In the morning Dad was tarring the Hatchery roof, we went up and down, we played old time cars too.

Aug. 24   In the afternoon we went over to the hatchery and played hockey, pool, and crokinole.

Aug. 25   In the morning and afternoon, we had a tournament on hockey, pool, and crokinole. Idwal won in hockey [a mechanical game], I won in pool [mini-pool]. Gene won in crokinole.

Aug. 26   A little after supper, we made and sailed boats. [in the gutter outside our home]

Aug. 27   This morning we left for Calgary. In the afternoon we went out to see an airplane at Calgary's airport. At night we stayed at the Whales hotel.

Aug. 28   In the morning we left for Banff. We had a swim and then went for a drive.

Aug. 29   In the morning we went for a swim at the higher springs.